Each year at the Indiana Water Environment Association’s Annual Conference concludes the 2 1/2 days of sessions with an Awards Program.  The sessions are selected to provide up to date material, from case studies, laboratory procedures, Indiana Department of Environmental Management’s updates, collection system, storm water, and Wastewater 101, LLC provides a Certification Review Course for 2 days.

One of the Awards is the Operations and Maintenance Award.  I know as I go from facility to facility I see people who have seen a problem and found a way to solve that problem (sometimes with duck tape, sometimes with some minor engineering).  I just want you to know that sometimes you must toot your own horn or someone at the plant should be tooting your horn for you.  Here is one case of someone seeing a problem and working through that problem and even being recognized by their peers with a well deserved award.  Will you be the winner of the O & M Committee’s Award next year?  Here is what the Award is about:

The award for the creation of an outstanding device is presented to an individual or facility that has developed an outstanding and original device or application of a device that facilitates plant operation. The Operations and Maintenance Committee selects recipients of this award based on their uniqueness and the device’s ability to increase productivity or safety at a facility.

This year’s recipient is the Seymour Wastewater Treatment Plant for their Grit Ripper implemented by Matt McIntosh. As you might guess, the Grit Ripper aids in the removal of grit from their system. The plant was experiencing problems with clogging in the classifiers which took between 10-12 man hours per classifier to clean and drain.  If both classifiers were clogged due to a heavy rain, everything might be shut down for an entire day. The Grit Ripper system works by adding more water volume and not restricting flow as much. The extra water keeps operators from having to take apart pipes that have become clogged and keeps the line free of buildup. Please help me recognize Mr. Matt McIntosh for his Grit Ripper device!

I contacted Matt and asked him to better describe his “device” and send photos, please see below:

The problem is the grit in grit removal system (cyclone classifiers). The problem we were experiencing was clogging of the classifiers and not being able to drain the classifiers effectively. This would happen at least once a week, sometimes twice a week. To clean and drain the classifiers would take between 10-12 man hours per classifier. At times with heavy rain both classifiers would be clogged at the same time, causing a shutdown of the entire day and overtime to be issued. The process of cleaning the classifiers included unbolting the 8-inch, 90 degree inlet pipe then taking apart the plumbing at the bottom. Once those were off, you would run a wire in the classifier to free the clog of grit and sand. The sand and grit would of course cover the person using the wire as well as the floor. This process would take hours to unclog, then came the clean up.  While this is going on, your grit pumps are off line allowing grit to by-pass the system and cause further problems down the line. Something had to change; so I came up with an idea. This idea has worked very successfully and I am amazed this was never installed or thought of until now. We were working on our grit classifiers weekly sometime multiple times during the week; now with the upgrade we have had three clogs in two years. With two of the clogs being at the first part of trial and error of the system. This has saved our plant thousands in man hours and allows us to spend our day focusing on other parts of the plant and keeping up with equipment maintenance. The system works by not restricting flow as much as possible and adding more water volume. The addiction of more water for cleaning out the lines kept us from manual taking pipes apart to be unclogged. Also with the additions of forcing water down the main drain line continuously keeps the line free of buildup in the 90 that was creating clogging. Another addition was adding two shut off valves, that allows us to force water into the classifier and through the drain line freeing the line from grit and sand. This also removes the air pocket that periodically forms inside the classifier. When an air pockets forms grit is not removed by the auger, causing a massive buildup of grit inside the classifier. 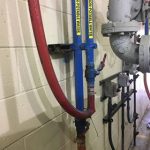 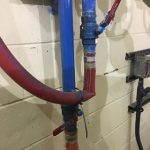 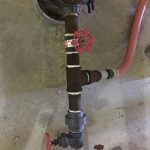 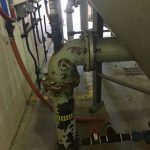 Congratulations to Matt, recognition well deserved.  Hope to say the same about another operator next year!