Once or twice a year I get a phone call or e-mail from operators regarding the red streaks in their clarifiers or aerobic digesters.  So, I thought I would supply some information to explain what it is, why it happens and how to deal with it.

Most well-run wastewater treatment plants may experience effluent quality issues in the spring, when reddish blooms often appear in the final clarifiers and cause higher TSS. These reddish blooms are caused by a proliferation of ceriodaphnia (water fleas). This is the same organism used in the effluent toxicity testing required by discharge permits. The ceriodaphnia thrive in the clear water of final clarifiers, feeding on algae growing on the sunlit submerged surfaces. As the mixed liquor temperatures warm up in spring, a healthy ceriodaphnia population proliferates as temperatures reach 18° C (64° F). The water fleas can interfere with effluent TSS testing, causing high results. For plants with effluent filtration, the bloom of water fleas can greatly shorten filter runs, resulting in more frequent backwash cycles and higher hydraulic recycling.

The key to controlling waterflea blooms is keeping final clarifiers clean of algal growth to deprive the waterfleas of their food source. Chlorinated sprays and brushing of effluent troughs will reduce algal growths. Clarifiers with dedicated trough cleaning systems (brushes or sprays) will generally not experience large blooms of water fleas. Plants with multiple final clarifiers can take units out of service and lower the water level below the effluent troughs to allow the algae-covered surfaces to dry out, killing the algae prior to returning to service. The ultimate control of algae is provided by clarifier covers that prevent sunlight from reaching the clarifier surfaces, since the dark conditions are not conducive to growths of either algae or water fleas.

In many cases the treatment is to take the clarifier out of service and chlorinate it to kill off the bloom. 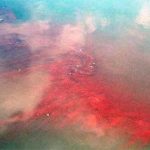 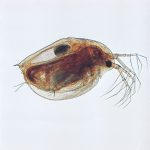 More About Water Fleas in Wastewater:

Daphnia pulex, although often called a water flea, is actually a freshwater crustacean closely related to shrimp. It takes its nickname from the way it propels itself through the water, which resembles the hop of a flea. Daphnia, the most common microscopic crustacean, can be visible to the naked eye, with lengths ranging from 0.2–5 mm. Their reproduction alternates between asexual and sexual reproduction, with females laying eggs during the warmer season and males only being produced during stressed conditions, such as overcrowding or cold temperatures. Eggs laid in the winter have a thicker protective shell and hatch in the spring.

Daphnia are metazoan organisms, like nematodes, bristle worms, and tartrigards. Metazoa feed on algae and bacteria, and algae and bacteria-consuming protozoa like amoeba, flagellates, and ciliates. In the simplest terms, bacteria do the grunt work in a wastewater treatment plant, consuming the soluble organic material like protein, carbohydrates, and fats, then forming as floc and settling out. Protozoa control the bacterial population and pathogens, cycle nutrients, and improve water clarity. Metazoa keep protozoa and bacterial populations in check; some process sludge.

According to Modeling Daphnia Populations in Wastewater Stabilization Ponds in Minnesota, by Charles Joseph Hathaway and Heinz G. Stefan, Daphnia eat algae, but not all types. Some algal particles, such as those of blue-green or filamentous algae, are too large to fit into their mouths. They focus on unicellular algae, bacteria, and protozoa, and during the winter, they also consume a little sludge. Because blue-green algae and green algae compete, predation of green algae by Daphnia can help to give harmful blue-green algae a foothold in the lagoon.

Warming temperatures jump start Daphnia’s metabolism as algae bloom in the spring. As Daphnia rapidly reproduce in response to the availability of algae, they help to remove TSS and cloudiness and turbidity.

As part of the complex food web of a wastewater lagoon, the presence and condition of water fleas can give clues to treatment conditions.

Lagoon Daphnia are useful as consumers of algae, improving water clarity and reducing TSS, and controlling bacterial and protozoan populations. But once they’ve consumed all the available algae, water fleas get stressed. This stress–due to low food and low dissolved oxygen–causes them to turn red or pink, resulting in red or pink streaks in the lagoon. Red or pink streaks in the lagoon are Daphnia’s way of telling you your lagoon has low DO.

Daphnia prefer lower pH conditions, possibly because of the effect of high pH on ammonia. They are ammonia-sensitive, preferring concentrations of less than 0.15 mg/L, and disappearing entirely at ammonia concentrations over 0.7 mg/L.

James,
I am so glad you found the article helpful for your facility. That is what it is all about – helping each other.
Barb