Studies conducted to identify I & I can be very elaborate involving engineering consultants and costing large amounts of money or they can be basic and conducted by system operators. The size of the system and the extent of the problem will dictate what measures are necessary.

Methods that are commonly used for identifying the location and extent of infiltration and inflow are:

* Late Night Survey. Very little flow should be occurring in the collection system in the early morning hours (2:00 AM – 4:00 AM). By surveying manholes for clear water that is near ground temperature a generalized idea of the extent of infiltration can be made. (This may not work in all areas of larger systems).

* Closed Circuit Television (CCTV) inspection. CCTV inspection is often used to identify infiltration problems. A purpose built camera is inserted into the collections lines and the line is video taped so problem areas can be analyzed. A thorough line cleaning prior to video tapping is very important. 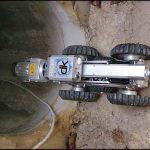 * Smoke Testing. Smoke testing is used to identify broken joints and leaking manhole barrels that could allow infiltration to enter the system and to identify illegal taps (customer not paying sewer fee) or connections to the sewer system that would allow storm water to enter. For this test smoke is forced into the collection system by an engine driven fan located over a manhole opening. 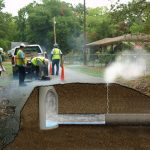 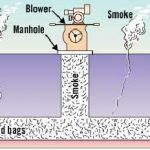 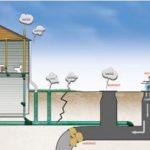 * Flow Records. Wastewater treatment flow records often are used to identify storm events that introduce inflow into the collection system. Also, flow records that show a constant early morning flow during periods of run-off can be used to identify infiltration. Chart recording flow measurement devices allow the volume and duration of I & I to be characterized. 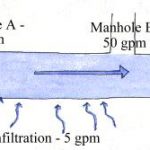 Numerous methods are available to designers and engineers to correct infiltration and inflow problems once they have been identified. These include sewer replacement, slip lining (in-situ form), pipe bursting, chemical grouting and improvement of storm sewers. Not many of these options are within the capabilities of the average collections department, so contractors most often perform them. Collections crews do have the ability to minimize some infiltration and inflow problems, such as repairing or replacing individual deteriorated manholes, raising manhole rings and covers in area that flood, and repairing broken joints when they are discovered. Whenever possible, collection system operators should work to limit I & I so that the treatment plant can perform its job of treating wastewater.