Pumps that do not have packing in the stuffing box will be equipped with a mechanical seal. Mechanical seals are comprised of two highly polished seal faces. One seal face is inserted in a gland ring that replaces the packing gland on the stuffing box. The other seal face is attached to the rotating shaft. It is held in place with a locking collar and is spring loaded so that there is constant pressure pushing the two seal faces together.

When the pump runs, seal water is piped into the stuffing box under enough pressure to force the seal faces apart. The seal faces don’t touch when the pump is running, but the friction loss created as the water pushes them apart prevents any leakage from the gland plate. Failure of the seal water system will result in the seal faces rubbing against each other. The friction that is generated when this happens can destroy a mechanical seal in a matter of seconds. 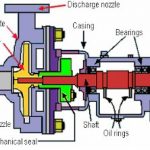 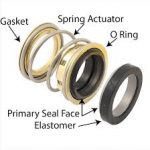 Whenever two pieces of rotating equipment such as a pump and motor are used, there must be some means of transmitting the torque from the motor to the pump. Couplings are designed to do this. To function as intended, the equipment must be properly aligned at the couplings. Misalignment of the pump and the motor can seriously damage the equipment and shorten the life of both the pump and the motor. Misalignment can cause excessive bearing loading as well as shaft bending which will cause premature bearing failure, excessive vibration, or permanent damage to the shaft. Remember that the purpose of the coupling is to transmit power and unless the coupling is of special design, it is not to be used to compensate for misalignment between the motor and the pump. 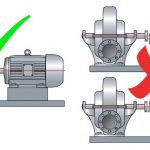 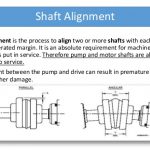 Pump bearings usually should last for years if serviced properly and used in their proper application. There are several types of bearings used in pumps such as ball bearings, roller bearings, and sleeve bearings. Each bearing has a special purpose such as thrust load, radial load, and speed. The type of bearing used in each pump depends on the manufacturer’s design and application. Whenever a bearing failure occurs, the bearing should be examined to determine the cause and if possible, to eliminate the problem. Many bearings are ruined during installation or start-up. Bearing failures may be caused by:
1. Fatigue failure,
2. Contamination,
3. Brinelling,
4. False brinelling
5. Thrust failures
6. Misalignment,
7. Electric arching,
8. Lubrication failure,
9. Cam failure