Pumps, motors, and drives should be oiled and greased in strict accordance with the recommendations of the manufacturer.

Every pump has certain characteristics under which it will operate efficiently. These conditions can be illustrated with pump characteristic curves. The graph of the pump curve should show:

The graph may contain a curve labeled “NPSH” (Net Positive Suction Head) instead of a BHp (Brake Horsepower) curve. NPSH represents the minimum dynamic suction head that is required to keep the pump from cavitating.

To use the pump curve:

When the head pressure of the pump represented by this curve is 200 feet, the output is 350 gpm. The brake horsepower under these conditions is about 22 BHp and the efficiency is 80%. If the impeller or the speed of the pump changes, all of the pump’s characteristics will also change. 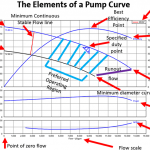 The highest head pressure that the pump will develop is called the “shut off head” of the pump. The shut off head for the pump in this curve is 240 feet of head. When a pump reaches shut off head, the flow from the drops to 0 gpm. This is a valuable piece of information for conducting a quick check of the pump’s performance. If the pump cannot generate its rated shut off head, the pump curve is no longer of any real value to the operator. A loss of shut off head is probably caused by an increase in recirculation inside the pump due to worn wear rings or worn impellers. 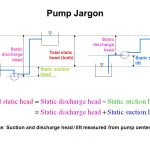 There is another factor that might affect the shut off head of the pump. The pump curve assumes that the pump is running at design speed. If a pump that is designed to spin at 1750 rpm and it is only turning at 1700 rpm, the shut off head will also be lower than the pump curve. However, if the pump speed is checked with a tachometer and found to be correct, the wear rings or impellers are probably in need of repair. 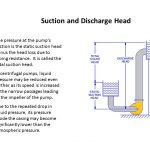 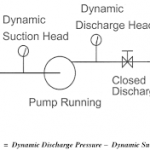