Probably one of the most vexing problems encountered by operators of the activated sludge process is the problem that arises when the solids will not separate (settle) from the supernatant. This problem has a variety of causes, but the phenomenon are grouped into what is called “bulking”. Strangely, the supernatant that does exist during episodes of bulking is often very clear, but the solids will simply not settle and compact enough, and solids washout results.

Sludge bulking can be caused by filamentous type bacteria. In this problem, it is the shape of the filamentous bacteria themselves that prevents the solids from settling and compacting. However, other types of solids separation problems also occur. When an imbalance exists in the nutrients of the waste stream entering an activated sludge system, many of the microorganisms in the mixed liquor will form a large amount of viscous, gelatinous slime. This is the same material that draws the organisms together during bioflocculation. When formed in excessive amounts, the gelatinous slime can cause a type of non-filamentous bulking, known as “viscous bulking”. This problem most often occurs at treatment plants that treat industrial wastes, which can be deficient in nutrients such as phosphorus and nitrogen.

A different kind of bulking problem can be encountered during the winter months, when cold-water temperatures make it easy to supersaturate the aeration basin with oxygen. In this type of bulking, the super-saturation of oxygen causes the mixed liquor to remain neutrally buoyant and settle very slowly. This is often accompanied by chunks of sludge rising to the surface of the secondary clarifier, much like denitrification. The problem is easily corrected by reducing the aeration supply.

During episodes of sludge bulking (whatever the cause), operators have a natural tendency to increase the RAS flow in order to remove the rapidly building sludge blanket from the secondary clarifier. Unfortunately, this only compounds the problem as the hydraulic loading on the clarifier increases and the clarifier ultimately fails due to the high hydraulic loads. Always remember, any amount of RAS that is pumped from the bottom of a clarifier quickly returns to that clarifier as inflow. Although increasing the RAS flow to remove solids from the clarifier appears at first logical, it is only treating a symptom of the bulking. Whenever dealing with sludge bulking problems, it is important to treat the problem, not the symptoms. At the onset of bulking, it would be wiser to lower the RAS pumping rate, even though to many, this seems counterintuitive.

Conditions such as; low pH, low D.O., septic influent or recycle streams and nutrient imbalances have all been demonstrated to encourage sludge bulking. The most common cause is through the overgrowth of filamentous bacteria. Filamentous bacteria are associated with specific conditions that foster their growth. By knowing which filament is causing the problem, the conditions that allowed their growth can be identified and corrected. For this reason, whenever bulking occurs, plant records should be reviewed in an attempt to locate the cause of the problem. Identification of the cause will not remedy the present bulking condition, but it will shed light upon the underlying root of the problem, and measures can then be taken to correct the problem and prevent the same conditions from occurring again. 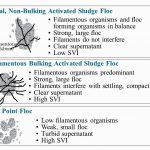 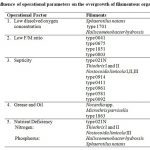