Operators of activated sludge systems may encounter a variety of foam and scum problems. Non-degradable detergents, grease, oil and other unknown substances can all create foam and scum. Most types of foams that are caused by detergents can be controlled by simply hosing them down regularly. Other foams can be extraordinarily persistent and even seem to have a life of their own. For the worst of the foams, this description is very appropriate, because filamentous bacteria that feed upon grease and oil cause the foams.

Some filamentous bacteria, such as Nocardia, can be responsible for severe foam problems but do not typically cause sludge bulking problems. Other organisms, such as Microthrix parvicella cause severe foaming and bulking problems, at the same time. Because of this fact and the fact that it does not respond well to the selector effect, Microthrix parvicella is perhaps the most difficult filamentous bacteria to combat.

Generally, the persistent foams are the result of filamentous bacteria metabolizing grease and oil. These filaments have adapted to be buoyant, which allows them to exist and grow at the surface of the aeration basin, where the grease and oil can be found. In an aeration basin, there is very little competition for this food source, so these filaments can grow unchecked. As the number of filaments increases, the foam grows. Over time, MLSS solids will become trapped within the foam, adding to its size.

The only effective long-term solution is to interrupt the food supply by stopping the grease and oil from entering the aeration basin in the first place. The most effective means for accomplishing this is to enforce sewer use ordinances that ban the discharge of oil and grease into the sanitary sewer. If this cannot be accomplished, a tight mesh barscreen or even a fine screen can be employed to remove the oil and grease at the plant headworks. Properly designed and operated primary clarifiers can also do a good job of removing grease before it can enter the aeration basin.

Floating sludge and floating scum can also create foam. Much of the time, these unstable foams can be kept in check using water sprays. The higher the MLSS concentration, the more susceptible an aeration basin is to foaming. Furthermore, the aeration rate directly affects the height of the foam that will result. Often, a brown foam layer over an aeration basin is simply a sign that the system is carrying excessive solids. Increasing the wasting rate until the MLSS concentration is brought down to the appropriate level can cure this problem.

Operators have attempted many methods to combat the various foams that occur on aeration basins. Chlorine surface sprays, steam boxes and hydrogen peroxide injection have all been used to reduce foam, although there effectiveness is often questionable. RAS chlorination is NOT effective against foam.

Aerobic, anoxic, and anaerobic selectors have been used to prevent the growth of filamentous foam microorganisms by creating an environment in which they are at a competitive disadvantage to non foam forming organisms. These are usually employed at the head of the aeration basin. As more information is gained about these techniques, they will be employed on a wider basis. 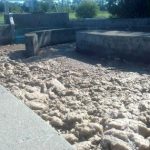 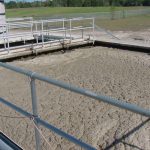 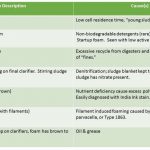 Remember that not all foam is a bad thing. A small amount of crisp white foam on the surface of a aeration basin is a sign of a system that is operating at the ideal F:M ratio. Systems displaying this type of crisp white foam produce a excellent settling sludge and leave a very low effluent BOD and TSS. 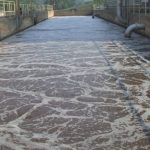