A 2 feet wide rectangular channel is flowing 30 inches deep with an average velocity of 0.8 feet per second. What is the approximate flow rate?

To find the flow rate use a variation of the velocity equation. First calculate the area of the channel, and we have the velocity. Then plug it into the Q = A * V formula (Q = A X V). Convert inches into feet for the depth.

Based on the current Ten State Standards, sewage flow rates shall be based on one of the following:
1. Documented wastewater flow for the area being served. Water use records are typically used for this purpose.
2. 100 gallons per person per day combined with home population densities specific to the service area. Most approval agencies will accept published U.S. Census Bureau home density for this criterion.

The vacuum system is a sealed system that eliminates ground water infiltration from the piping network and the interface valve pits. However, ground water can enter the system as a result of leaking house plumbing or as a result of building roof drains being connected to the plumbing system. While vacuum systems have some inherent reserve capacity, significant amounts of homeowner I&I can result is severe system operating problems. For this reason, it is recommended that designers consider methods of eliminating ground water from plumbing systems during the design phase of a project rather than adding a homeowner infiltration component to the design flow.

The geometry of a vacuum sewer system is similar to that of a water distribution system. Rather than looped, however, it is normally designed in a tree pattern. The length of vacuum mains is generally governed by two factors. These are static lift and friction losses. The determination of these losses is beyond the scope of this course.

Due to restraints placed upon each design by topography and sewage flows, it is impossible to give a definite maximum line length (length from vacuum station to line extremity). In perfectly flat terrain with no unusual subsurface obstacles present, a length of 10,000 ft can easily be achieved. With elevation to overcome, this length would become shorter. With positive elevation toward the vacuum station, this length could be longer. As an example, one operating system has a line that, from the vacuum station to the line extremity, 16,500 ft in length. There are three (3) major items for the designer to consider when laying out a vacuum system:
1. Minimum distance between lifts
2. Minimum slopes
3. Slopes between lifts

By locating the vacuum station centrally, it is possible for multiple vacuum mains to enter the station, which effectively divides the service area into zones. This results in operational flexibility as well as service reliability. With multiple service zones, the operator can respond to system problems, such as low station vacuum, by analyzing the collection system on a zone by zone basis to see which zone has the problem. The problem zone can then be isolated from the rest of the system so that normal service is possible in the unaffected zones while the problem is identified and solved. 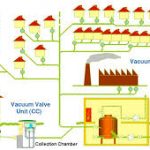 By dividing the service area into zones, the total peak flow to the station is also spread out among the various zones, making it possible to minimize the pipe sizes.

Static loss is generally limited to 13 ft. Items that result in static loss are increased line length, elevation differences, utility conflicts and the relationship of the valve pit location to the vacuum main. Vacuum sewer design rules have been developed largely as a result of studying operating systems.

An advantage to the use of vacuum sewers is that the small diameter PVC pipe used is flexible and can be easily routed horizontally around obstacles. The feature allows vacuum sewers to follow a winding path as necessary. In most cases, vacuum sewer mains are located outside of and adjacent to the edge of pavement and approximately parallel to the road or street, which reduces the expenses of pavement repair and traffic control. In areas subject to unusual erosion, the preferred location is often within the paved area. Some municipalities also favor installation within the paved area since subsequent excavation is less likely and more controlled (via permit application only), and therefore a location more protected from damage.

However, community disruption potential during construction and maintenance for this approach increases substantially. With two or more houses sharing one valve pit, overall system construction costs can be significantly reduced, resulting in major cost advantage. In some circumstances, however, this approach may require the main line to be located in private property, typically in the back yard. There are two disadvantages to this type of routing.
1. It requires permanent easements from one of the property owners, which may be difficult to obtain.
2. Experience has shown that multiple house hookups can be a source of neighborhood friction unless the pit is located on public property. The designer should carefully consider the tradeoff of reduced costs to the social issues prior to making the final routing decision.

In most valve pits, up to four separate building sewers can be connected to one sump, each at 90 degrees to one another. However, this is rarely done as property lines considerations and other factors may render this impractical. By far, the most common valve pit sharing arrangement is for two adjacent houses to share a single valve pit. Some have attempted to reduce costs by having additional houses sharing a single valve pit. Experience has shown that, while this may appear to be viable on paper, many times it is not achievable during construction. And, even if it is, the perceived cost savings does not always materialize. Longer runs of gravity laterals are required which results in deeper valve pits needed to accommodate this. Also, the additional 2 or 3 ft of excavation of not just the pit, but the gravity laterals as well, may result in extensive dewatering. In certain cases, such as the existence of a cul-de-sac or when small lots with short front footage exists, it may be possible to serve 3 or even 4 houses with a single valve pit; however, all other design factors must be considered.