Anaerobic digestion relies upon the actions of two groups of bacteria living together in the same environment. One group consists of SAPROPHYTIC organisms, commonly referred to as the “acid formers”. The second group, which uses the acid produced by the saprophytes, is the “methane fermenters”. The methane fermenters are not as abundant as the acid formers in raw wastewater, in part because they only reproduce in a pH range of 6.6 to 7.6. The key to anaerobic digestion lies in balancing the rate of acid formation with the rate of methane fermentation. If the rate of acid formation is higher than the rate of methane production, the pH will begin to fall below the area that favors the methane formers.

In the middle temperature range, (20 – 45º C), MESOPHILIC, medium temperature loving, bacteria will thrive. This is the most common temperature range for anaerobic digesters in use at wastewater treatment plants because it produces a high level of methane production with a short digestion time (normally around 25 – 30 days). The ideal temperature is about 35º C, (95º F), so digesters of this type are typically heated, often through combustion of the methane gas that they produce as a by-product. Mixing is included in this type of digester to ensure that the temperature is maintained evenly throughout and bacteria and food can come into contact with each other.

The highest temperature range, (49 – 57º C), is dominated by THERMOPHILIC, hot temperature loving, bacteria. Because of problems maintaining the high temperature, sensitivity of the organisms to temperature change and reported poor liquid/ solids separation, few digesters run in the thermophilic range.

It is important to note that you cannot simply raise the temperature of a digester and have a successful operation in another range. The organisms take time to adjust to the new temperature. A good rule to follow for anaerobic digestion is never change the temperature more than one degree (Fahrenheit) a day to allow the organisms to become acclimated.

Anaerobic digesters are typically two stage, (primary and secondary), operating in the mesophilic temperature range. The first stage is heated and mechanically mixed. Up to 90% of the gas production occurs in the primary digester while the second stage is used for storage and solids/liquid separation. Mixing is usually provided for the second stage, but only used periodically. Supernatant is sometimes drawn from the secondary digester and returned to the treatment plant to make room for more sludge. The secondary digester also serves as a source of seed organisms for the primary digester in case it becomes upset. 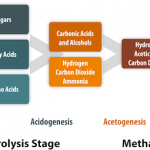 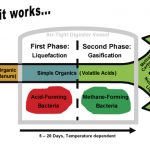 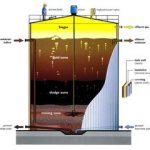 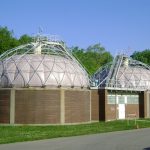 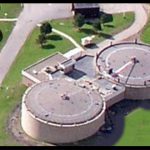 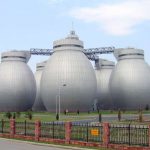