The pipe used in anaerobic digesters must be able to withstand pumping pressures and severe corrosion. Cast iron or steel is typically used. Plug valves are commonly used in sludge and scum lines. Gate valves or butterfly valves are undesirable and rarely used because grease, rags and debris can catch on them and prevent them from seating.

Most modern anaerobic digesters are cylindrical in shape, around 20 ft deep and have sloped floors so that sand, grit and heavy sludge will be removed during sludge withdrawal.

The sludge feed line is typically piped to the top of the primary digester on the side opposite from the supernatant overflow pipe or injected into the sludge recirculation line upstream of the heat exchanger.

Sludge draw-off lines are usually placed on blocks inside the digester. It is preferable not to locate them under the floor of the digester because they would not be accessible in case of blockages. These lines are normally at least six (6) inches in diameter and equipped with plug valves. The lines are used to transfer seed sludge from the secondary to the primary digester, to remove sludge to a drying bed or other dewatering unit or to recirculate bottom sludge and break up scum blankets.

Digesters can be mixed by several method. Mechanical mixers that utilize propellers and draft tubes are common. Mixers that work by compressing and bubbling methane gas into the sludge are also used.

MESOPHILIC anaerobic digestion produces 8 – 12 cubic feet of gas for every pound of volatile matter added and 12 – 18 cubic feet for every pound of volatile matter destroyed. The gas consists mainly of methane (CH4) and carbon dioxide (CO2). The methane content will vary from 65 – 70% while the carbon dioxide content will vary from 30 – 35%. Digester gas contains a heat value of 500 – 600 BTU per cuft. (Natural gas contains 900 – 1200 BTU per cuft). Digester gas can be re-used in various ways such as; heating the digester, driving an engine/generator and heating plant buildings. The gas system for a digester serves to remove the gas to a point of use, provide safety features and burn off excess gas in a waste gas burner. The main components of the gas system include; the gas dome, pressure and vacuum relief valves, flame arresters, thermal valves, sediment traps, drip traps, gas meters, manometer, pressure regulators, and the waste gas burner.

A boiler fired off of digester gas, natural gas or propane typically provides the heat for the digester. Boiler water is best maintained at between 60 and 82º C. Two methods of heat exchange are common; sludge recirculation through an external heat exchanger or heat exchangers located inside the digester.

Many digesters are equipped with floating covers, (most commonly located on the secondary digester) to provide a flexible space for digester gas storage. A properly designed floating cover can also keep the scum blanket mixed in with the digesting sludge, which will prevent the blanket from becoming excessive. Floating covers can move up and down as the level of gas and sludge increases or decreases. The interior of the digester is sealed off from the atmosphere by a sludge seal located between the annular space between the cover and the digester wall. If the level of sludge in the digester is allowed to drop low enough, the seal will be broken and an explosive mixture of methane and oxygen could develop. Explosions have occurred when an inattentive operator withdrew too much sludge from an anaerobic digester with a floating cover. EXTREME CAUTION MUST BE USED TO PREVENT AN EXPLOSION WHENEVER AN ANAEROBIC DIGESTER IS EMPTIED OR DEWATERED FOR MAINTENANCE OR CLEANING.

The sampling well consists of a 3 or 4 inch diameter pipe (with a hinged sealing cap) that extends down through the gas layer, at least one foot into the digesting sludge. The sampling well permits samples to be taken of the sludge without dangerously exposing the gas to oxygen. Be aware that some gas will always be present when the sampling well is first opened. Sampling wells are sometimes referred to as “thief holes”. 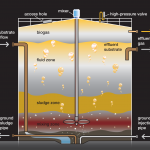 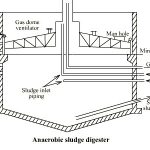