The Nitrogen Cycle
Nitrogen, element number seven on the periodic table, is an essential part of living matter and a relatively common element on our planet. 70% of the atmosphere that we breathe is nitrogen, and plants and animals alike require nitrogen as one of the building blocks of living tissue. Because of the many oxidation states that nitrogen can assume, it exists in many forms. Ammonia (NH3), nitrite (NO2), nitrate (NO3) and organically bound nitrogen are just a few of the many possible compounds of nitrogen. The nitrogen on our planet is constantly being changed from one form to another. These changes are illustrated by the nitrogen cycle. 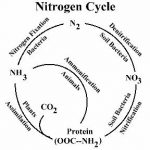 Inorganic nitrogen provides a nutrient source for algae in receiving waters. The combination of nitrogen and phosphorous can cause uncontrolled algae blooms, which choke waterways. As the lower layers of algae die off, the decomposing material can cause low D.O. conditions to exist. This condition is known as eutrophication. Algae can also cause taste and odor problems in drinking water supplies. Ammonia is toxic to many fish and aquatic species. When discharged from a treatment plant, it can cause fish kills and the death of other aquatic organisms in the receiving stream. Ammonia toxicity increases when little dilution is available in the receiving stream, and when the pH and temperature of the stream are elevated. Ammonia also creates a biological oxygen demand, which contributes to eutrophication in natural waters.

Nitrate can act as a nutrient in receiving streams and poses a health risk whenever it is allowed to contaminate drinking water supplies. The drinking water problem is of particular importance where numerous septic tank discharges into shallow groundwater have resulted in the contamination of drinking water supply wells. When water that contains elevated levels of nitrate (> 20 mg/L) is consumed, an illness known as methemoglobinemia can occur. Typically affecting infants and the elderly, methemoglobinemia causes its victims to turn a pale blue/ gray and become lethargic and ultimately comatose. Death can soon follow if no treatment is administered. It mostly affects infants, and so is commonly known as “blue-babies syndrome”.
For all of these reasons, the removal of nitrogen from wastewater continues to grow in importance. In the future, with increased effluent re-use and greater stress placed upon our rivers, lakes and streams, the importance of nitrogen removal will only increase. 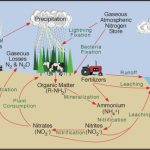 Nitrogen can combine with many other elements to form a variety of compounds. Nitrogen is present in domestic wastewater mainly in the form of ammonia and organically bound nitrogen. (Depending upon pH, ammonia can exist in solution as a gas, (NH3), or in solution as a dissolved solid; ammonium (NH4)). Ammonia and organic nitrogen compounds can be measured collectively using the Total Kjeldahl Nitrogen (TKN) test method. Although they may do a good job at removing BOD, TSS and pathogens, modern wastewater treatment plants remove only a small amount of the TKN present in the influent, unless configured specifically for nitrogen removal. There are a variety of methods for removing nitrogen from wastewater.