Constructed wetlands are the name given to a process designed to provide small scale wastewater treatment. The focus of wetlands has been the need to remove nitrogen from the waste stream. Biologically, constructed wetlands operate much the same way as natural wetland processes.

Constructed wetlands operate by using wetland plants to up take the nutrients in the wastewater. In theory they were expected to nitrify and denitrify wastewater using a combination of microbiological growth and aquatic plants. Typical plants include Bulrushes and Cattails.

Constructed wetlands come in many forms including Subsurface flow, and overland or ponds. The main difference between these two is whether the wastewater is allowed to surface and be acted on by the sun and wind.

In Subsurface flow (also known as reed beds) the wastewater is distributed via a system of pipes below the surface in a bed of gravel or pumice. This type of system operates much like a trickling filter in that a microbiological colony is established to remove the nutrients from the wastewater. These units’ are often found in conjunction with septic tanks. The septic tanks were to remove settleable solids which would cause clogging of the media and force the water to the surface. Often found lacking in the design of the systems is an adequate method for removal of the large objects common to wastewater streams. Grit removal is also a problem, with the accumulation of grit causing a lack of detention time in the septic tanks. The unavoidable suspended solids from the septic tank along with the inability of the media to slough off solids (as a trickling filter does) has been found to plug the media and forces the wastewater to the surface anyway.

These beds are planted with bulrushes and cattails which, in addition to removing nutrients, are also supposed to provide oxygen to the subsurface area of the media preventing septic conditions and the associated odors.

In actual practice these systems have problems starting with the high oxygen demand placed on the bed by allowing the water to turn septic in the septic tank. The high oxygen demand, in addition to the suspended solids leaving the septic tanks, force high oxygen demand water to the surface where odors have been found to develop. In a study done by W. Daniel Boivin, Evaluation of Constructed Wetlands Performance in New Mexico Mr. Boivin states subsurface flow constructed wetlands are incapable of removing the nitrogen in septic tank effluent to the New Mexico Water Quality Commission standards.” Key to this is the need for additional oxygen to assist in the nitrification process.

One of the big selling points in the constructed wetlands systems is the lack of maintenance needed in the system. In actual operation this has not been the case. Maintenance is essential for these systems to operate at the minimal levels obtained in the field. The annual removal of the vegetative growth is needed to keep the systems healthy. This vegetative growth is the SLUDGE removed from the system. In addition, most of the systems have required mechanical aeration, which come with associated electrical and maintenance costs. 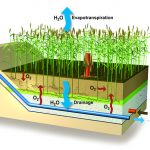 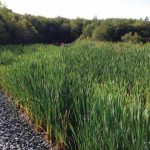 OVERLAND FLOW WETLANDS
Constructed wetlands using surface flows are another type of constructed wetlands found. The surface application of wastewater prevents the plugging of the media noted in subsurface flows. In addition the environment more closely simulates the natural wetland environment found in nature. In this style of wetland treatment it is common for lagoon type systems to be incorporated into the design. The addition of a lagoon provides additional oxygen to the wastewater and provide for treatment through the conventional algae/wind action of the lagoons.

While this design addresses some of the problems with a subsurface flow the problem of odors remain. It stands to reason that a constructed swamp would produce the same type of swamp gasses that are produced in natural wetlands. In addition the wetlands design most often seen does not provide for the BOD loading of wastewater coming from a septic tank. In the overland flow design care must be taken to remove accumulated debris from the system. The addition of Gambusia (a mosquito eating fish) for mosquito control may also be warranted.