Chlorine gas (Cl2) is compressed into a liquid for storage. It can be purchased in cylinders containing 150 or 2000 pounds of the liquefied gas. Chlorine gas is cheaper per pound than either of the other forms.

CHLORINE POWDER
Chlorine in its dry form is calcium hypochlorite [Ca(OCl)2]. It is also most commonly known by the trade name HTH (High Test Hypochlorite). Only about 65 – 70% of the HTH is available as chlorine. The rest is calcium, which is not a
disinfectant. Dry chlorine is 2-3 times more expensive, per pound of chlorine, than chlorine gas.

CHLORINE BLEACH
Chlorine bleach is a liquid solution of sodium hypochlorite (NaOCl). Bleach is usually 3 – 12% available chlorine and 88 – 97% water. Bleach is the most expensive form of chlorine.

Chlorine is a greenish-yellow gas. It is 2.5 times heavier than air. Chlorine gas is very corrosive. It turns into hydrochloric acid when it comes in contact with moisture (in the water, in the chlorine lines, or in your eyes or lungs). It does not support combustion though. It can be harmful if inhaled in small quantities and fatal in larger doses. Because of the potential for injury to workers and the general public from chlorine gas accidents, safety must always be the first consideration when it is handled.

The chlorinator room should have a window in the door so that the operator in the room can be seen from the outside. The light and vent switches should also be located outside the room. The room should have ventilation located at floor level since chlorine gas is heavier than air and will settle in the lowest spot in the room. The room should be kept between 60o F and 120o F. Below 60o F, chlorine gas forms chlorine hydrate, also known as “green ice,” when it comes in contact with water. This green ice can clog the injector and gas piping, creating a serious maintenance problem.

NEVER enter a chlorine facility without ventilating for several minutes first. The National Fire Code now requires that new gas chlorine facilities be equipped with a scubber system that will remove chlorine gas that may be present in the ventilation exhaust. These systems must have a backup power supply to keep the scrubber running in the event of a power failure. Check with local Fire authorities before new chlorine facilities are built to make sure they will be in compliance.
CHLORINE STORAGE The room where chlorine cylinders or HTH drums are stored must be kept dry and well ventilated. Chlorine should always be stored in a room separate from other chemicals. Chlorine cylinders that are empty should be separated from those that are full. When not in use, all cylinders should be chained to the wall.

NEVER remove the valve hood from a chlorine cylinder unless it is chained to the scales and ready to be put on the system. All cylinders should be chained to the wall or the scales unless they are being moved. Emergency repair kits are available that can be used to seal leaks in the broken valves or leaking cylinders. Every system that operates a gas chlorine system should have an emergency kit or be able to get access to one on very short notice.

To prevent the cylinder from rupturing when it gets too hot, every gas cylinder will have a “fusible plug” that is designed to melt at 157 degrees F. There is one in the valve assembly of every 150 lb. Cylinder and six (three on each end) in the body of every 1-ton cylinder. As one of these fusible plugs melts, it will allow the release of chlorine gas from the cylinder. This still represents a serious problem, but the release will be more gradual than it would if the tank ruptured. 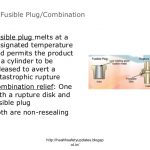